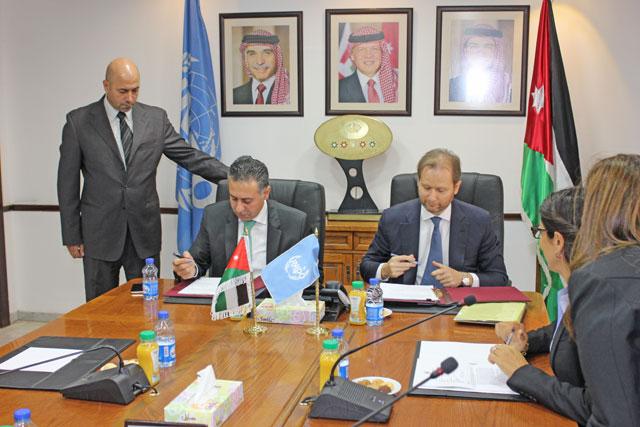 AMMAN — Jordan and the United Nations Industrial Development Organization (UNIDO) on Monday signed a project agreement to improve business environment and small- and medium-sized enterprises’ (SMEs) competitiveness in Jordan over the next three years, a ministry statement said.

The agreement, which was signed by Minister of Industry, Trade and Supply Yarub Qudah and UNIDO’s regional representative Cristiano Pasini, aims to increase Jordan’s private sector contribution to job creation and promote economic inclusion of youth and women by supporting the development of competitive SMEs.

Qudah noted that the project responds to the needs of the industrial sector in Jordan, and is aligned with “Jordan Vision 2025, the recently adopted industrial policy 2017-2021, and the Royal initiative for economic growth plan 2018-2022”, according to the statement.

He praised the relationship between Jordan and UNIDO, which contributed to supporting the Kingdom on its path towards development.

The minister said that the three-year project is structured along two main components. The first one aims at developing an information system on the industrial sector by designing an “Industrial Intelligence Observatory” that supports the production of evidence, based industrial and market intelligence analysis.

The second component will focus on enhancing investment and market opportunities, in four selected value-chain drivers of job creation (including self -employment) for youth and women, in both urban and rural regions, according to the statement.

“The minister of industry, trade and supply of Jordan asked UNIDO to develop a project to support the competitiveness of industrial SMEs with a special focus on supporting job creation for youth and women,” Pasini was quoted in the statement as saying. “We would like to encourage the international communities to contribute to this important project which will help to expand industrial production and foster inclusive and sustainable industrial development [ISID],” he added.

A specialised UN agency, UNIDO promotes ISID through the development of clusters in cultural and creative industries, the promotion of women empowerment, the support to green industry and the implementation of multilateral environmental agreements such as the Montreal protocol and the Stockholm convention.

Since 2014, UNIDO has been also providing livelihood support to vulnerable rural communities in Jordan affected by the influx of Syrian refugees, the statement concluded.